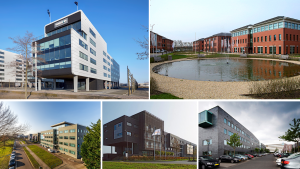 These five buildings were part of a larger property portfolio that Nexus had under management on behalf of the seller since 2015. At acquisition in 2015, an asset management strategy was drawn up by Nexus with the goal to add value to the portfolio by renewing existing lease agreements and reducing vacancy.

This sale is the result of a successful completion of the management objectives, and concerns the following buildings:

The lease agreements with, among others, Samskip in Rotterdam, Roche in Woerden and Nieman in Zwolle have been renewed, in combination with an investment in the improvement of the buildings. After departure of tenant Accenture in Almere, this building was successfully converted into a multi-tenant concept, and several new lease agreements were signed. The building in Vianen was virtually empty and is now leased to VolkerInfra, in combination with a renovation of the general areas and an investment in a new installation package for the tenant.