Nexus Real Estate has closed a new lease agreement with Scalehub for 2,100 sqm office space in the Avenue building, located on Europalaan 40 in Utrecht. With this lease agreement Nexus welcomes its first major tenant in this recently completely renovated building in Utrecht.

This former office location of Berenschot has been completely renovated during the past year into an iconic building, entirely according to contemporary standards, which gives it not only an accessible and luxurious character, but also a particularly elegant appearance. The completely renewed installations and furnishings have created a comfortable and healthy working environment that is ready for the future.

The interior of this iconic building was designed by renowned architects Graziosi Progetti and offers its users a fully equipped meeting centre with various conference rooms, a refined social space and a coffee bar/grab & go restaurant. With the arrival of Scalehub, a beautiful business centre is now being added, entirely in keeping with the look and feel of the building. 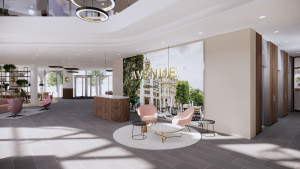 ScaleHub originally started as a coworking concept called StartHub, founded by a group of entrepreneurial friends in the summer of 2014. They started hosting events to bring entrepreneurs together and offered flex spaces in the old Ford garage on the Overtoom in Amsterdam West. Thom van Wijk joined at the end of 2015 after a career at Randstad. He discovered an unused floor on the Wibautstraat that was converted into flexible offices for the scale-up community. The concept was named ScaleHub Offices. At the moment, Scalehub has seven locations in Amsterdam and with the arrival in Building Avenue, they are opening their first location in Utrecht.

With the establishment of Scalehub in the Avenue building, Nexus welcomes its first major tenant in the building. Approximately 7,300 m² of office space remains for rent.

Building Avenue is part of a larger real estate portfolio that has been managed by Nexus Real Estate since 2019. Nexus was advised in this transaction by JLL and Scalehub was advised by Flexas.