January 2018 – Nexus Real Estate has recently signed three new lease agreements in the Omega office building at the Versterkerstraat 6 in Almere. After becoming fully vacant due to Accenture’s departure in March 2017, the Omega Building is now over 30% occupied within nine months. 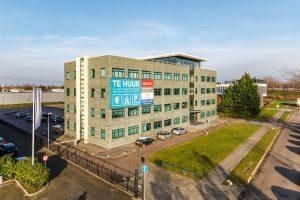 The Omega Building was fully let to Accenture since 2007. Due to the move of Accenture in March 2017 to Utrecht, the Omega Building became vacant. Nexus Real Estate has converted the building into a multi-tenant concept, in which, among other things, investments have been made in a renovation and styling of the central entrance area and a new access control system.

In particular the good accessibility by car, the prominent location along the A6 motorway towards Amsterdam and the high parking ratio at the building, were reasons for these parties to enter into a long-term lease agreement.